Can wood make our cities lighter?

As cities grow in size, their increasing weight is impacting the very ground they stand on. Could shifting from concrete to wood in the construction of new buildings make our cities lighter?

When trying to shed a few pounds, humans tend to eat better and exercise harder, but weight-loss solutions are rather more complex when you are a heavily-populated city. From residents and vehicles to buildings and infrastructure, not to mention consumables such as food, water and fuel, the world’s cities are getting heavier with US Geological Survey geophysicist Tom Parsons recently estimating that his home city of San Francisco weighed 1.6 trillion kgs – roughly equivalent to 290 million African elephants – not including the weight of utilities, roads or bridges.

With almost 70% of the worldwide population in 2050 expected to live in urban areas, the increased weight of global cities poses a range of environmental and societal challenges. Could switching from conventional construction materials to wood make a difference?

How do heavy cities impact the environment?

In a word: subsidence. Subsidence is when the ground’s surface drops due to subterranean movement, which happens both naturally – the movement of water carving caves beneath the earth’s surface, for example – and increasingly due to human activity, such as pumping groundwater and urbanisation. “When you put up a big structure, it's going to sink and it sinks a fairly significant amount [20-30 millimetres or more], but once it settles, it initially stays constant at that point,” says Parsons. “Yet, there’s also an ongoing secondary settlement that happens when building on clay-rich soils, which can continue indefinitely such that the building keeps sinking down.”

This is a particular problem in coastal cities like San Francisco, which is not only situated on a river delta, but also vulnerable to sea level rises and therefore flooding. For instance, the Millennium Tower in San Francisco is estimated to have sunk by more than 400 millimetres in the last 10 years, while the Indonesian government is even considering moving the capital from Jakarta, which has suffered coastal subsidence of more than two metres in the last 20 years. “It’s worse when you're near a shoreline like a lake or a coast,” says Parsons. “But, even up high, if you're causing subsidence, you’re changing the shape of the drainage pattern, which is going to have downstream consequences''.

On a micro scale, these consequences could damage buildings and homes by shifting their foundations, but on a macro scale it could lead to flooding, contamination of wetlands and erosion, with Parsons warning that mitigation of these unintended effects could worsen the environmental impacts. “If you build a seawall [to protect from flooding], all the erosional effects of the ocean are going to be moved somewhere else,” he says.

Using wood as a building material would slow down the sinking of cities. Photo: Di/Unsplash

Could using wood be the solution?

Subsidence is an irreversible process, so it’s best to apply preventative measures. With coastal migration on the rise and an estimated 60% of the buildings needed to accommodate these new arrivals yet to be built, the focus has fallen on construction. Concrete is currently the building material of choice, and its production also accounts for 8% of the world’s CO2 emissions. Timber, on the other hand, sequesters carbon and is lighter than conventional building materials, requiring less energy and time to produce and assemble.

“There is a clear environmental aspect to building with timber,” says Antti Koulumies, Senior Vice President of UPM Timber.

Further, timber's carbon sequestration is enhanced by regularly cutting and replanting forests. “The best way to manage carbon from forests is not to leave them as they are forever, as over time they will start to renew themselves – you will have natural rotting, storm damage, pests and forest fires, etc. – and all the positive effects will go away,” adds Koulumies. “Whereas when you take wood in a sustainable way from forests and use them in storage, you actually increase the amount of carbon sequestered in the long term.”

Wooden buildings are also easier to customise and design, as “there are different grades of timber, which can be optimised for usage, such as cross-laminated timber, which increases the strength and is used in building apartment blocks out of wood,” explains Koulumies.

Meanwhile, Parsons wonders whether wooden structures might be better for areas with frequent earthquakes, as “a wooden building is not as rigid so they can flex during strong shaking.” ”This is actually the case; many of our Japanese customers build from wood because of its good resistance to earthquakes,” replies Koulumies. 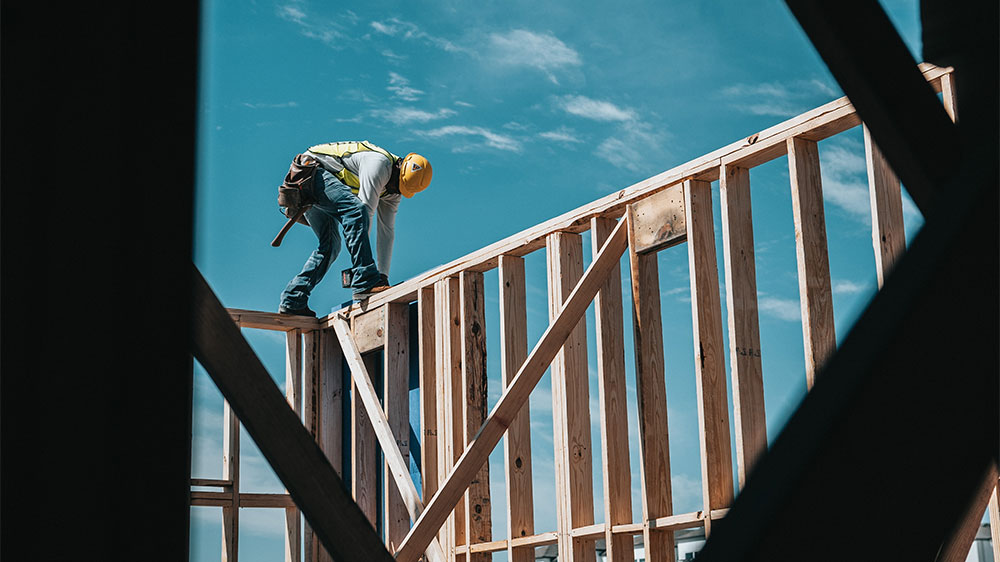 As a building material, wood is considerably lighter and more flexible than concrete, steel and aluminum. Photo: Josh Olalde/Unsplash

From the 85-metre wooden Mjøstårnet building in Oslo to the proposed 350-metre timber tower in Tokyo, cities’ skylines could soon resemble forest canopies in terms of material and environmental benefits, but Koulumies believes there are awareness and cost questions to be answered first. “5-10 years ago most people looked at the cost and design of their building materials, not their environmental aspects,” he says. “Although this is now more important, as an industry we still need to do more analytical proving of the positive benefits of wood as a material and rectify some of the misinformation, such as when you cut a tree, you’re releasing carbon. Wood is completely renewable.”

Only time will tell if ‘urban forests’ will be a feature of the future. In the meantime, while cities are unlikely to take out gym memberships any time soon, replacing their construction diet of concrete with timber could see an improvement on the scales.