Molla Mills is reconnecting people with the joy of handicrafts – and they might get hooked.

It could almost be called a whittling accident – except that no one was injured. As Mari Leppälä, better known as Molla Mills, was finalising her third book about the art of Virkkuri crochet in 2015, she decided to add an extra feature: a step-by-step guide for whittling a crochet hook. After all, the book was inspired by ideas aimed at encouraging men to take up crocheting. She thought maybe the option of making your own hook would do the trick.

“It was a light-hearted way to end the book, my dad and I wandering in my brother’s forests in North Karelia,” Mills recalls. “It was a lot of fun, and people have really liked it.”

Then, in 2020, the Finnish Crafts Organisation Taito chose whittling as the craft technique of the year. In the press release, director of the organisation Minna Hyytiäinen said that while in earlier times people learned to handle knives as children, now traditional whittling skills have been forgotten by many.

“The skill of whittling is part of folklore that is at risk of disappearing,” the press release reads.

In the announcement, Taito emphasised that the aim of choosing whittling as the technique of the year was to show that you don’t need to be an expert woodcarver to enjoy it; even the simplest experience can bring tradition just a little bit closer. All they needed to get the message across was someone to do a bit of teaching and encourage everyone to give it a try.

To the general public, Molla Mills is best known for her work promoting crocheting. In addition to numerous Virkkuri books about the art, which have been translated into about a dozen languages, she also occasionally travels the world leading crochet workshops.

Her love for handicrafts stems from childhood. Her father is a carpenter, and her mother, a textile worker.

“We’ve always been a really DIY family,” Mills says. “We had all the time and space in the world to try out and experiment with all kinds of things, pushing our boundaries in what we could and couldn’t do in handicrafts.”

Later, her studies turned her into an arts-and-crafts professional. Although she hadn’t taught whittling before being approached by Taito, she’s very familiar with working with wood. During her studies at a university of applied sciences, she had access to all kinds of tools, even if she looked a bit out of place in the woodworking studio with her signature 1950’s-style dresses and high heels.

“Being able to use the facility at school was what really opened up the world of wood to me,” she recalls, “even if I looked a bit strange next to all the machinery.”

What Mills particularly appreciates about crochet and whittling is that they’re both very simple and easy – in other words, accessible. The tools required – be it a knife or a crochet hook – are affordable (or even free!) and small, just as are yarn and wood, and the techniques are relatively straightforward, yet versatile.

When it comes to teaching, Mills is excited to see how things turn out. She doesn’t consider herself a guru, but more as someone who can share inspiration and enthusiasm. She also doesn’t think workshops are – or even should be – just about learning, rather, she approaches them as a way to build community and even as a kind of therapy.

“It’s been incredible to see how people begin to bond and form friendships as they get to know each other in the workshops,” she says. “I remember a workshop in Chile where the women seemed to get along so well, I thought they’d known each other for ages, but it turned out that they’d just met.”

When it comes to the therapeutic side effects of handicrafts, Mills believes that getting to know new people and sharing and caring is helpful for mental health as well.

“Half of the workshop is actual work,” she says, “and the rest of it is just being together.”

For Mills, her dad’s workshop remains her safe space, a spot where she can just relax, forget about the outside world and focus on what is – literally – at hand. Although at this point in her career, handicraft isn’t as much meditation as it is work, one of the things she loves best about her job is seeing others experience a meditative moment when working with their hands.

She’s also thrilled to be part of spreading the skill of whittling and encouraging people to give it a go, even if they don’t consider themselves very arts-and-crafty. Mills says we all have that element to us, but we tend to forget it.

“It seems like we’re slowly losing the connection between our brains and our hands, and many young people aren’t that interested in handicrafts,” she says. “Instead, we use our mobile phones almost as an extension of our hands, like our own imagination wasn’t enough!”

Maybe, she hopes, whittling and other forms of handcraft will make a comeback soon, just as the coronavirus pandemic has led many to reconnect with nature and make their way outdoors. To Mills, forests have always been a place of calm and relaxation, and the more she travels, the more she learns to appreciate Finnish forests.

“Whenever I’m away, I miss the Finnish woodland terribly,” she admits, “especially the ease of access and the fact that you’re often the only one around.”

Molla Mills has travelled the world teaching people about the therapeutic benefits of handicrafts.

A step-by-step guide to whittling a crochet hook 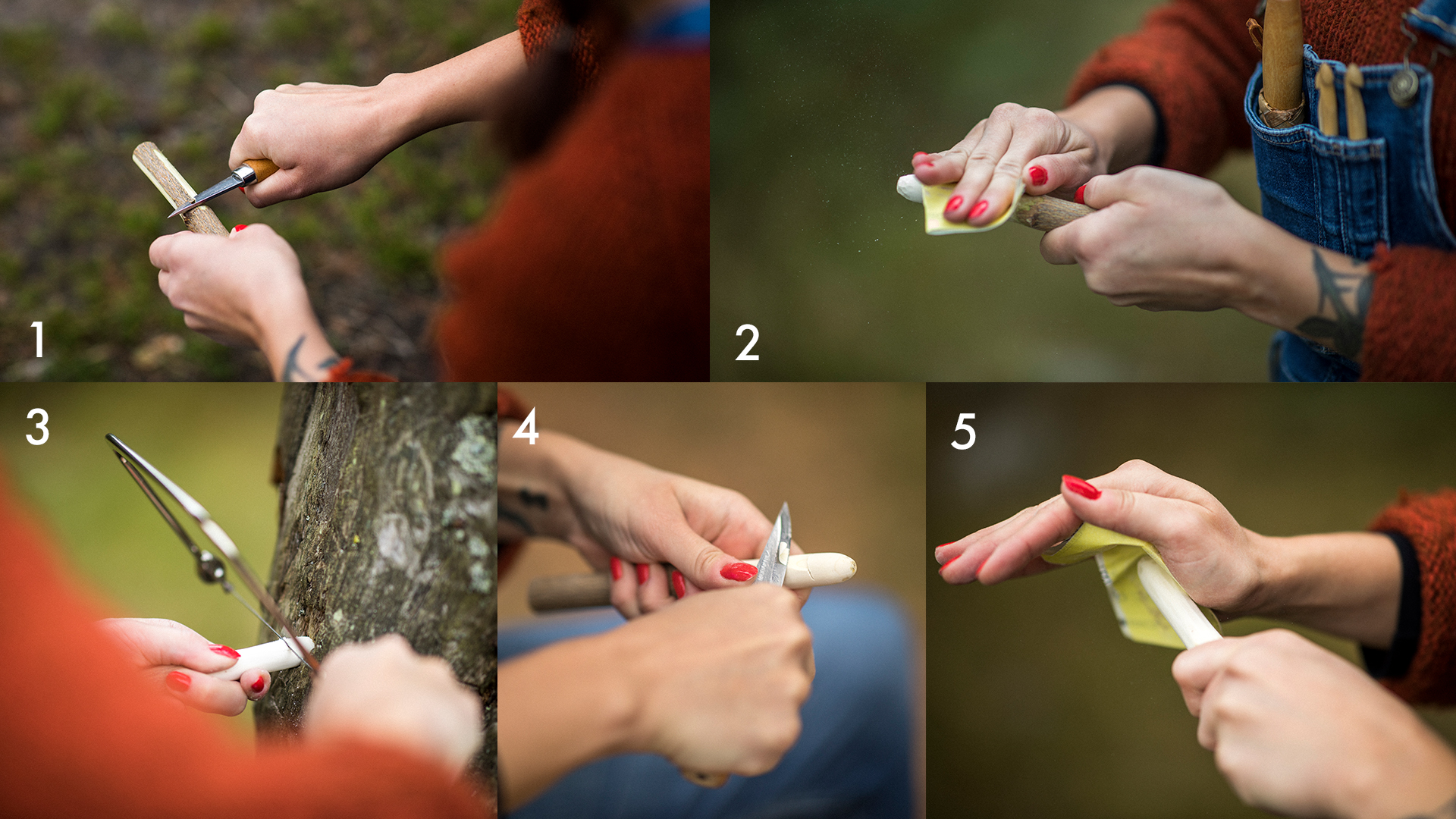